End Grain cutting boardsare more durable, stronger and more long lasting than ordinary boards that we use in everyday use. For this reason, they are used by the main chefs and butchers, the so-called Butcher block, which in their daily work the required boards are just such characteristics. Basically it’s about the position of the fiber of wood in the board itself.

To understand why this is so we will explain the principle of their making. Ordinary boards are produced by cutting the tree trunk longitudinally, or parallel to the fiber of the tree./span>
Thus, the face grains are formed, or if more of these boards are glued together, they make a laminated board, (edge grain).

When cutting with a knife on such a board, it is natural that there will be interruptions of the fibers that are parallel to the surface on which the board is lying, the fibers are completely cut up and on the board there are permanent trails of the knife. Also, in this way, the blade of the knife is blunted more quickly.
To imagine more picturesque, imagine wood fibers like a bundle toothpicks. 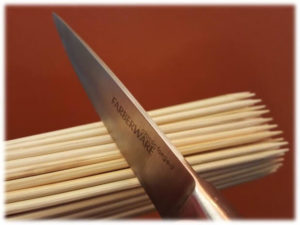 The end grain cutting boards are formed when the ordinary board, either made from one piece or lamellar, cuts transversally, or normally, on the direction of the wood’s fibers, and such parts, by turning the fibers up, are glued together in the board.
Now the fibers of the tree are normal on the surface on which the board lies, and when cutting with a knife on it or hitting it with a meat chopper, the blade of the knife, the meat chopper, passes through the fibers, the fibers are spaced, and after knife remove from them are returned to the original position with much less damage than the ordinary boards because there is no interruption of fiber. For the same reason, knives stay sharp longer and need to sharpen rarer 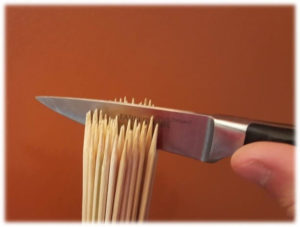 The final treatment of the end grain cutting boards consists of several steps. First, the whole board is immersed in the mineral oil, leave for about ten minutes to soak, remove it from the oil and leave it natural decant. Tomorrow the same procedure is repeated again. When the board is well dried, the third step, coating the board with a mixture of mineral oil and melted beeswax in a ratio of 4: 1. By wiping it with a cloth, the wax enters deep into the pores of the wood, closes them and thus makes the board more resistant to moisture and safer in terms of hygienic characteristics as it prevents the entry of bacteria from food into pores of wood.

Because of the way it is made, which is described in detail here, the end grain cutting boards are much more expensive than ordinary boards, but also more durable and have more firmness.